Heritage Trail is a 26-mile multi-use recreational trail comprised of compacted crushed limestone that follows an abandoned railroad right-of-way connecting the City of Dubuque on the eastern edge of the county to the City of Dyersville on the western edge of the county. The county, seven cities, and the Dubuque Soil and Water Conservation district are working together on a Regional Comprehensive Plan that uses the 13 comprehensive planning elements and 10 smart planning principles in the State Code to add sustainability goals and objectives into each of the communities' comprehensive plans.

One of the goals of the Dubuque Smart Planning Consortium is to promote economic development in the region by connecting all seven cities in the Consortium to Heritage Trail. A CPAT offered the Consortium recommendations on how to make the trail more accessible and user friendly, how to promote the sustainability of the Trail, and how to expand the recreational and economic development opportunities of the entire region. The Heritage Trail project was Dubuque County's first sustainable project on a regional scale and will serve as a model for similar broad-area efforts in the county.

Myriad possibilities for tourism, education, and conservation exist along Heritage Trail. The native flora and fauna, unique geological features and histories of place comprise many areas of interest.

October 20, 2012
The team presented its preliminary report to the community Saturday afternoon in the City of Dubuque. Community members listened to each team member's presentation. APA project manager, Ryan Scherzinger, then facilitated questions from the audience as they asked questions and provided feedback to the team's findings and recommendations.

October 19, 2012
The team discussed all of its observations, data and information provided by various stakeholders, and public input to prepare its final presentation scheduled for Saturday afternoon in Dubuque.

October 18, 2012
The team conducted stakeholder interviews with over 50 people throughout the day. Stakeholders included: the Dubuque County Board of Supervisors; Dubuque County Conservation Board and Friends group; the City of Dubuque mayor, engineer, and planning director and staff; city officials and other interested residents from the cities of Asbury, Farley, Sageville, Graf, and Dyersville; bicycle and snowmobile club members and enthusiasts; Tri-State Area Trail Vision representatives; local engineers; and annual trail event organizers.

October 17, 2012
The team toured the Heritage Trail with Dubuque County staff during the day. CPAT members were able to see the repairs made to many of the 32 bridges along the trail that were damaged by several major flooding events in 2008 and 2011. During the tour, the CPAT also explored the connections to several of the towns that sit adjacent or near the trail. Starting in the City of Dubuque along the Mississippi River and ending at the westernmost point on the trail in Dyersville, where the Field of Dreams movie site is located, the team held a public meeting attended by over 100 people. Community members at the meeting participated in breakout group discussions where they shared their ideas, concerns, and overall vision for the trail. Breakout groups each reported out their findings to the whole group. Five large trail maps that broke the 26-mile trail into 5-mile segments was taped to a wall in the meeting room. Attendees took markers and were asked to write what they'd like to see along the trail to provide the team with additional information.

June 21, 2012
Team leader Paula Reeves, AICP, and APA Senior Outreach Associate Ryan Scherzinger visited Dubuque County to tour the Heritage Trail and surrounding cities. They followed the entire length of the trail with staff members from the county's Conservation Board who initially built the trail 30 years ago and currently maintain the trail. Starting on the western end of the trail in Dyersville, they began a day-long series of meetings with representatives from each of the cities of the Dubuque Smart Planning Consortium. Also in attendance during the meetings were members of various snowmobile clubs who utilize the trail during the winter months. Along the trail, Reeves and Scherzinger spoke with bikers and walkers, adjacent property owners and business owners to get a better sense of everyone's connections to the trail, how they use it and observe it being used, and what changes, if any, they'd like to see occur. The day's final meeting occurred in the City of Dubuque with representatives from the Dubuque Area Chamber of Commerce, Convention and Visitor's Bureau, County Board of Supervisors, City of Dubuque, Greater Dubuque Development Corporation, East Central Intergovernmental Association, and other interested residents and property owners. 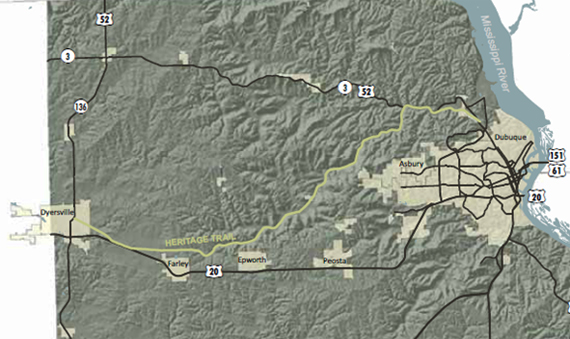 Paula Reeves has been developing transportation projects for the State, cities, counties, and transit agencies for 20 years. She currently manages the Community Design Office at Washington State Department of Transportation and serves on the board of directors of APA's Washington Chapter, chairing the Community Planning Assistance program. In both these roles she provides a range of transportation planning and engineering services to cities, counties and transit agencies. She has a broad transportation background that includes urban design, engineering, environmental experience, and she is a practicing mediator in Thurston County. Reeves also serves on the National Transportation Research Board's Pedestrian Committee and the AICP Community Planning Task Force. She earned her master's degree, with engineering and law school course work in urban and regional planning, from the University of Florida.

As park planner and landscape architect for the Vancouver-Clark Parks and Recreation Department in Washington, Jean Akers oversees the park acquisition, planning, capital development, and asset management programs for the city's park and trail system and Clark County's urban and regional parks, trails, and open spaces. She works with state, city, and county agencies, organizations and citizen groups to facilitate the overall planning, policy development, and acquisition of viable open spaces to improve the quality of life for residents while protecting the integrity of the natural environment. A registered landscape architect, certified planner, horticulturist and consulting arborist, Akers has been working across these professional disciplines to create and foster ecological landscape design and planning for over 30 years. She has design experience in integrating rainwater resources into the landscape through planning, site design, and land management techniques.

Jason Epley is executive vice president of Benchmark CMR, Inc. He has 17 years of experience in the planning profession, and his past positions have included working with municipal, county, regional, and state government planning programs throughout North and South Carolina. He specializes in comprehensive planning, development regulation, urban design, public involvement, and meeting facilitation. Epley also he serves as the executive director of the North Carolina Downtown Development Association. A Certified Public Manager, Epley has managed a number of complex planning projects, including a recent comprehensive pedestrian and greenway plan for the City of Clinton, North Carolina. He also served as the co-chair of the All American Trail development committee, overseeing the implementation of the 26-mile multi-use trail connecting three counties in southeastern North Carolina.