Laney Walker/Bethlehem is a long-term redevelopment project on 1,100 acres in the heart of Augusta, Georgia encompassing two historic African-American neighborhoods. Plans call for a mixed-income, mixed-use, sustainable neighborhood, much as the neighborhood was in its heyday. The masterplan won the 2013 HUD Secretary's Opportunity and Empowerment Award in Chicago at the National Planning Conference. The aspirational plan calls for 10,000 residents, and $2.8 Billion of investment before it is fully implemented. The city of Augusta is working with two teams of consultants to implement the plan and has taken out bonds to finance the project. The team was tasked with analyzing the current bond structure to determine the best refinancing options, as well as to identify future funding streams to continue the project for 10-15 years. In addition, the CPAT looked at the staffing and consultants in relation to the redevelopment project as well as gave an overall assessment of the implementation.

APA, through its CPAT program, was engaged by the Augusta-Richmond County, Georgia, to evaluate the City’s work and progress to date on the Laney Walker/Bethlehem Neighborhood revitalization effort, and to make recommendations regarding future funding support for the project. 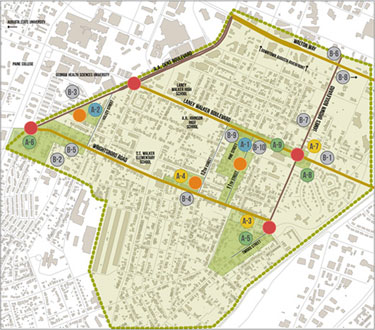 The full team arrived in Augusta for a packed few days of work to study the Laney Walker/Bethlehem Redevelopment Program. The team was able to meet with many different stakeholders and residents. The team really dug into the politics behind the project, to see where the interest was. Overall, the team was very impressed with the progress and how much redevelopment has taken place. Seeing the redevelopment first hand going through the neighborhoods was exciting. Meeting with a group of residents, the pride in their neighborhood was overwhelming. Weeding through the politics was tricky, but the team was able to present their preliminary findings to the Augusta-Richmond County Commissioners. Their final report is now available for download.

Team Leader Carson Bise, AICP and APA project manager Thomas Bassett visited Augusta for the preliminary visit. They were able to meet with all the major stakeholders involved with the redevelopment of the Laney Walker/Bethlehem area. After background from the consultants and the city staff, the group visited the study area to see the development that has occurred. The city was able to acquire a large amount of parcels as well as provide the necessary infrastructure upgrades to accommodate new development The city has developed houses, but also private developers have been investing and constructing units as well. The preliminary visit was a good start to figure out the background of the funding and how to move forward with a full team visit in December.

Julie Franklin is a senior associate with Lawrence Group, a design, planning and development firm. For over two decades, Franklin has facilitated the creation and implementation of community-led plans focusing on local solutions and sustainability. She has built programs, development incentive packages, and public-private partnerships. Franklin previously served as economic development director for the City of Spartanburg and development manager for the City of Greenville, both in South Carolina, where she played a role in the revitalizing the cities' downtowns and surrounding neighborhoods. She holds a Master of City and Regional Planning degree from Clemson University.