Located at the crossroads of a historically significant parkway system and home to an impressive collection of world-class architecture, Elmwood Village is a premier urban, mixed-use neighborhood that dates back to Joseph Ellicott's 1804 plan for the City of Buffalo, New York.

The American Planning Association has selected Elmwood Village as one of 10 Great Neighborhoods in America for its vitality, broad spectrum of cultural and social assets, and its commitment to maintaining high community standards while solving real problems. 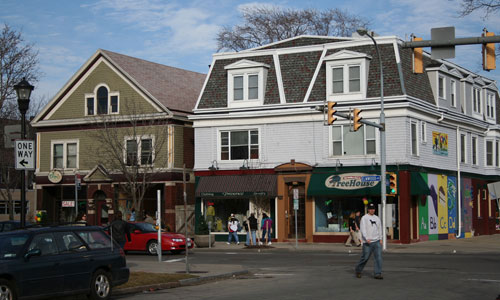 Tucked inside the City of Buffalo, mixed-use Elmwood Village is a neighborhood where one can find examples of works by renowned landscape designer Frederick Law Olmsted and architect Frank Lloyd Wright. The village also is home to several world-class cultural institutions, including the Albright-Knox Art Gallery, which contains one of the country's best collections of modern art. It includes a prosperous commercial district, primarily along Elmwood Avenue, with more than 200 shops and restaurants. Four large colleges and universities are located in or near the neighborhood, adding to the area's diversity and vibrancy. Helping make the neighborhood attractive and comfortable to pedestrians is the Elmwood Village Association, which has established design guidelines for the area to ensure new development does not detract from the existing architecture and character.

While Ellicott's plan gave definition to this neighborhood, it was a series of planning efforts spanning two centuries that wove Elmwood Village's intricate urban, economic, and cultural tapestry. The earliest, in 1868, was Olmsted's Park and Parkway System. Delaware Park, at the village's northeastern corner, is considered the system's crown jewel. Criss-crossing the village are three of Olmsted's tree-lined parkways graced with the homes of 19th-century industrial leaders and today's visionaries.

Despite these assets, residents left Elmwood Village for suburbia during the latter half of the 20th century. A dwindling customer base caused businesses along Elmwood Avenue, the community's main street, to close up shop. In the 1980s and early 1990s, the street saw a slow resurgence of small, funky retailers and college bars, attracted by quirky spaces and rock-bottom rents. 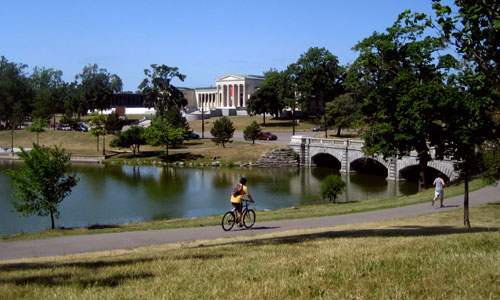 To encourage an economic and cultural renaissance, the nonprofit Elmwood Village Association was formed in 1994. With membership drawn from both the business and residential sectors, the organization used planning to reclaim the neighborhood's former vitality. One of its first successes was narrowing Elmwood Avenue and widening its sidewalks to shift the street's emphasis from cars to pedestrians.

It also is a place where business owners and residents work together to preserve the community's unique urban character and bolster its image. The result is a lively, walkable, clean, safe, and sustainable district where community spirit is contagious.

In 2005 the City of Buffalo announced plans to reconstruct a segment of Elmwood Avenue. The village association solicited neighborhood input and presented an alternative plan with a higher level of pedestrian amenities, including intersection bulb-outs, traffic circles, and other traffic calming measures. The Elmwood Village community hopes to have many of these elements included in the city's final reconstruction plan.

Design guidelines adopted by the association have resulted in new mixed-use structures built up to the street and in character with neighborhood architectural styles rather than single-use buildings set back from the street and surrounded by parking.

Standards are high in Elmwood Village, but given its proactive, "can-do" attitude, the neighborhood is able to support the needs of today's local businesses and residents without losing sight of its historic past. 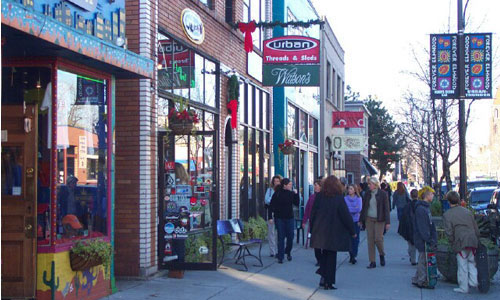