Conceived during the mid-19th century as a recreational space for residents who were overworked and living in cramped quarters, Central Park is just as revered today as a peaceful retreat from the day-to-day stresses of urban life — a place where millions of New Yorkers and visitors from around the world come to experience the scenic beauty of one of America's greatest works of art.

The American Planning Association (APA) has named Central Park one of the 2008 Great Public Spaces in America. An exemplary public space that successfully maintains a large naturalistic landscape in the midst of one of the densest cities in the country, Central Park is arguably the most emulated park in the country. As Parks Commissioner Adrian Benepe notes, "This year marks the 150th anniversary of Olmsted and Vaux's Greensward plan, which set the standard for park design throughout the United States." 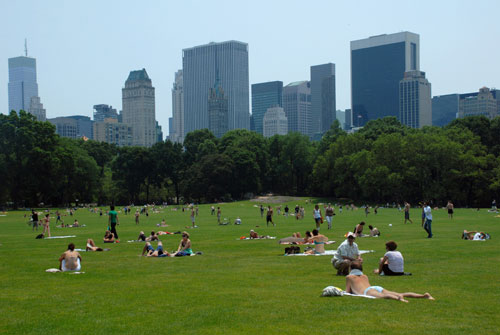 The park's designers, Frederick Law Olmsted Sr. and Calvert Vaux, submitted their winning entry to the design competition in 1858. The Greensward plan used innovative design approaches, including sunken transverse roads with landscape grading and plantings (a precursor to modern scenic parkways) to avoid the physical and visual disruption of traffic.

With the exception of the native woodland in the northwest corner and impressive rock outcrops, the 843-acre park was man-made — shaped from a rather unremarkable site. Through a complex system of grading and underground drainage engineering, swamps were transformed into naturalistic lakes. Soil was carted in from New Jersey and sculpted into meadows while plants were introduced to create lush woodland and "wild gardens." The original design was intentionally bucolic to replicate the countryside, but it contained a few formal elements — the Mall, intended to draw visitors to the heart of the park, and Bethesda Terrace at the terminus of the Mall, conceived of as a "palace for the people."

Under Parks Commissioner Robert Moses's tenure from 1934 to 1960, facilities for active recreation were emphasized over passive enjoyment of the scenery. Informal sports fields were redesigned into baseball diamonds and greens for lawn sports; the Central Park Zoo and the Conservatory Garden were constructed; and playgrounds, ice-skating rinks, a swimming pool, and concession buildings were either added or rebuilt. Moses also presided over the filling of the old reservoir to create the Great Lawn.

Andrew Haswell Green, who served on the Commission to create Central Park, and who has been called "The Father of Central Park" because of his years of devotion to its interests, was quoted as far back as 1893 in the New York Times saying, "Central Park did not happen. It was created, and by years of hard work along distinct lines."

Throughout its history, the park experienced waves of deterioration and revitalization. 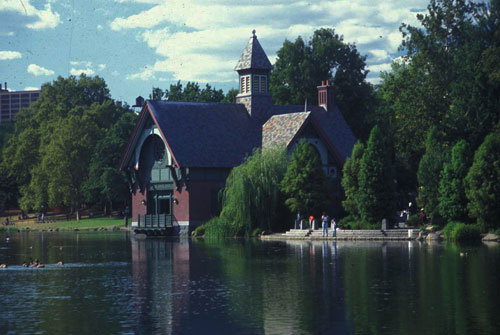 The 1920s marked one such period that saw worn carriage drives from increased automobile traffic, muddy paths, overgrown or dead trees and shrubs, unrepaired bridges, and littering and vandalism.

Another period of decline in the 1960s and '70s would eventually spark civic involvement to reclaim and restore the park. Fiscal crisis and the absence of effective management — combined with high-impact activities such as unregulated sports use and events of a scale unprecedented in the history of the park — had contributed to the park's alarming condition by the late 1970s. The once-verdant lawns had been reduced to trampled, barren dustbowls. Paths and architecture were crumbling; benches and light fixtures were broken; graffiti covered every available surface; clogged catch basins resulted in routine flooding that further eroded the landscapes and made paths impassable.

Several civic groups formed to combat this deterioration, including the Central Park Community Fund and Central Park Task Force. These organizations helped raise funds for projects in the park and promoted stewardship through education, youth programs, and volunteer initiatives. Their advocacy led to the creation of the Central Park Conservancy, a private not-for-profit organization that since 1980 has worked to restore the park in partnership with the city, and assumed the responsibility for its care.

Contributing to the park's remarkable turn-around and the success of its ongoing stewardship have been its ever-vigilant supporters and park patrons, who value their oasis in the urban jungle as much today as when it was created. Current fundraising campaign efforts are aimed at breaking the cycle of decline-and-restore that had characterized the park's long history prior to 1980.

As Douglas Blonsky, president of the Central Park Conservancy, recalls: "Not all that long ago, Central Park had declined nearly to the point of no return. It was rescued through the efforts of a citizen-government partnership forged 28 years ago to breathe life back into this most cherished of New York landmarks making it, once again, the most beautiful, best-managed urban park in the country." 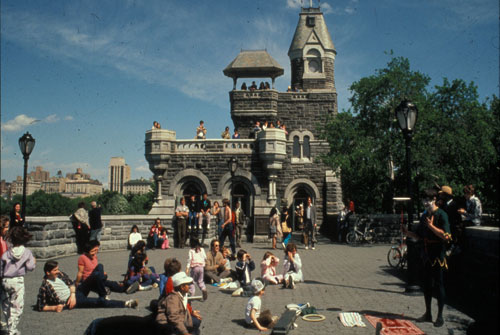