The seemingly endless horizon stretches for miles beyond the Virginia Beach Boardwalk. Built originally from wooden planks during the nation's Gilded Age, the five-block promenade attracted thousands of Victorian vacationers. Today, more than 2.2 million people visit the three-mile-long concrete boardwalk each year and it is an integral part of the City of Virginia Beach's economy, which relies heavily on tourism. As such, the boardwalk has been the focus of numerous improvement and planning efforts, the most recent of which explores extending a light rail line from Norfolk to the boardwalk.

The boardwalk extends 40 city blocks between Rudee Inlet to the south and 40th Street to the north. 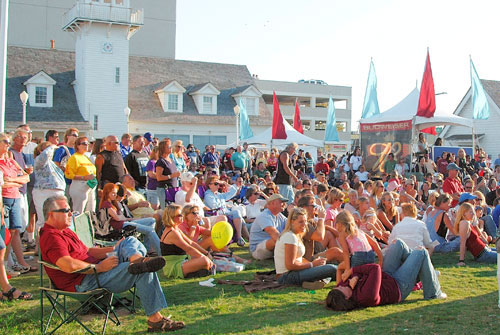 With the historic Coast Guard Station in the background, residents and visitors enjoy an entertainment event at the beautiful 24th Street Park, a cul-de-sac turned pocket park that was part of a $100 million boardwalk facelift in 1990. Photo courtesy of City of Virginia Beach.

Popular among residents and tourists alike, the Virginia Beach Boardwalk offers an abundance of cultural, recreational and historical events and activities. From its de rigueur amusement park and fishing pier to the Naval Aviation Monument, the boardwalk presents an unparalleled range of sights, sounds and diversions.

Since its construction in 1888, the boardwalk has been a community treasure. Reminders of the boardwalk's historic past are the 1895 deWitt Cottage — the oldest beach house along the city's oceanfront — and the 1903 Coast Guard Station, which stands on site of the waterfront's original 1870s Seatack Life Saving Station. 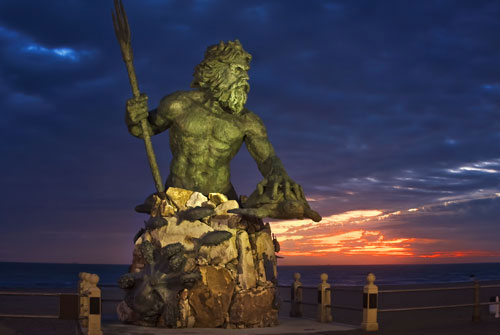 The boardwalk's King Neptune statue appears to be rising from the ocean. The city's famous landmark and public art piece is near 31st Street on the boardwalk. Photo courtesy of City of Virginia Beach. 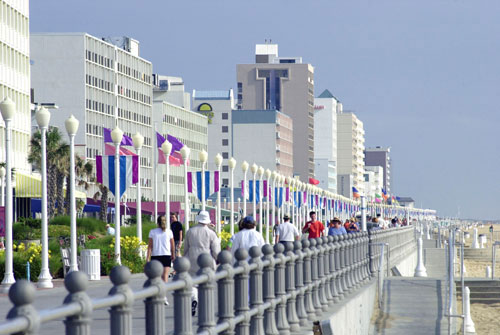 Lined by privately owned condominiums and hotels, the boardwalk is publicly accessible and draws more than two million people each year. Photo courtesy of City of Virginia Beach.