The restored Beaux Arts-style Ferry Building, once described as "a famous city's most famous landmark," is the quintessential picture of elegance with a 660-foot-long skylit nave and 245-foot-tall clock tower inspired by the 12th century bell tower in Spain's Seville Cathedral.

Located at the intersection of Market Street and the Embarcadero at 1 Market St. 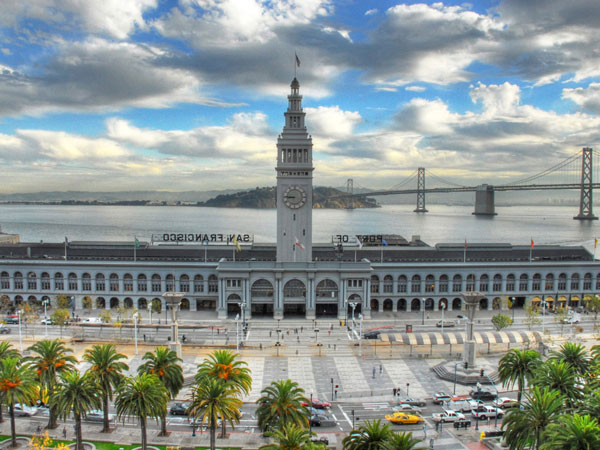 At the time of its construction in 1898, the Ferry Building's steel-frame foundation was the largest for a building over water in the world. The Oakland Bay Bridge can be seen in the background. Photo courtesy of Morgret.

The restored Beaux Arts-style Ferry Building, once described as "a famous city's most famous landmark," is the quintessential picture of elegance with a 660-foot-long skylit nave and 245-foot-tall clock tower inspired by the 12th century bell tower in Spain's Seville Cathedral.

During the 1930s, at the height of its use, 50,000 people entered the depot each weekday, making it the world's second busiest terminal, trailing only Charing Cross Station in London. With the opening of the Oakland Bay Bridge in 1936 and the Golden Gate Bridge in 1937, ferry ridership declined precipitously as workers and visitors from the east and north began driving into the city.

Another change pushing the building towards obsolescence was construction of the double-decker Embarcadero freeway in 1957 that left only the clock tower of the building visible. Offices filled in the large open hall, and its beautiful mosaic floor was covered up.

The Embarcadero freeway was damaged in 1989's Loma Prieta earthquake and demolished in 1991, opening a new chapter for the depot.

Since its reopening in 2003, more than 10,000 commuters a day have used the Ferry Building. Panoramic views of the bay, Treasure Island, and the Oakland Bay Bridge are available from a new wharf. A large, sunny plaza outside the building's southern end accommodates a year-round Farmer's Market. Inside, the building's great hall has been completely restored and includes restaurants, historic galleries, and places to sit and enjoy the waterfront. "It's not just an icon anymore," said San Francisco Planning Director Byron Rhett. "People are using the building again." 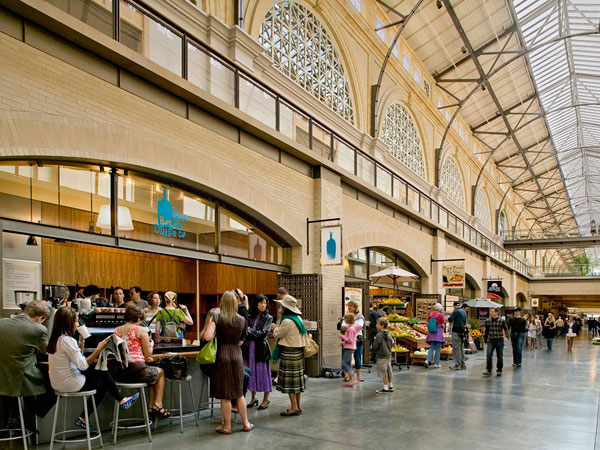 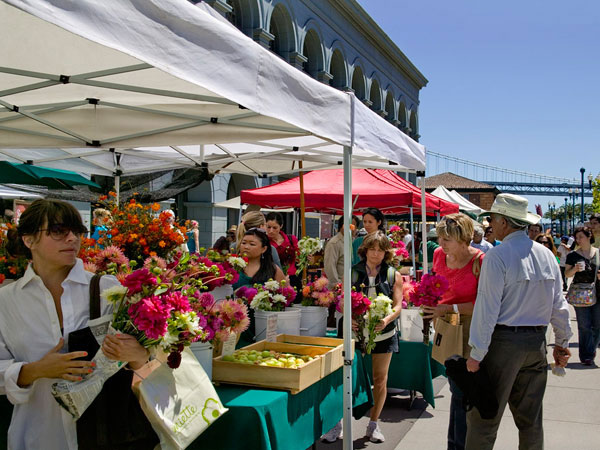 Run by the Center for Urban Education About Sustainable Agriculture, the farmer's market features cooking classes and an abundant selection of local produce, cheese, wines, and other foods three days a week. Photo courtesy of David Wakely.