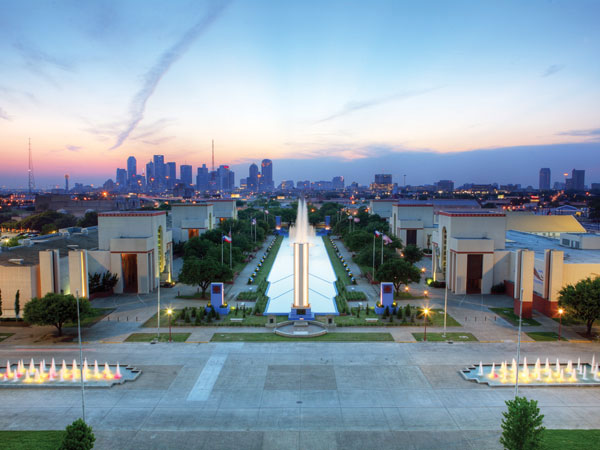 Fair Park features a reflecting pool synced to lighting and music, the largest collection of unaltered 1930s Art Deco exposition architecture in the United States, four distinct ‘zones' within the park, and a superb view of the Dallas skyline. Photo courtesy of Quimby McCoy Architecture Firm.

Scores of activities and events occur here throughout the year, from the State Fair of Texas to the Cinco de Mayo celebration, North Texas Irish Festival, CityArts Festival, and Kwanzaafest.

Located on a former cotton field, the site was initially acquired by a group of civic leaders for an annual state fair, which began in 1886. Renowned landscape architect and city planner George Kessler was later hired by the city to re-plan the site and identify sites for future buildings. Influencing his 1906 plan and design was the City Beautiful Movement, which advocated city beautification through well-laid-out public spaces, tree-lined boulevards, monuments, public art, and fountains — all of which are found at Fair Park.

The other person who played a major role in the design of the park was architect George Dahl. He was responsible for transforming the fairgrounds into the 1936 Texas Centennial Exposition, which was designed and built in just over 14 months. The centerpiece of the exposition was the Art Deco-style Hall of State with three-dimensional bas-relief carvings. Leading up to this building is an esplanade with a 700-foot-long reflecting pool. Rebuilt in 2009, the pool now has lights and a sound system for synchronized water, music, and light displays.

To assist the City of Dallas in raising money to restore and find new uses for the park's buildings, the nonprofit Friends of Fair Park was organized in 1986. Since the early 1990s more than $260 million in park plans, renovations, and improvements, including development of a comprehensive park plan, have been made by Dallas and its private partners.

"Fair Park is much more than an assemblage of buildings," notes National Geographic's Traveler magazine. "[It's] a district telling dozens of stories from dozens of cultures." 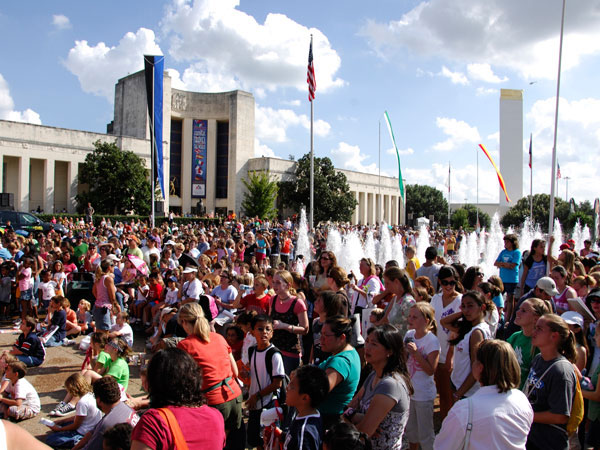 A crowd gathers for the annual Texas State Fair in front of the Hall of State building. This plaza is used to host many events that take place on the park grounds throughout the year. Photo courtesy of the State Fair of Texas. 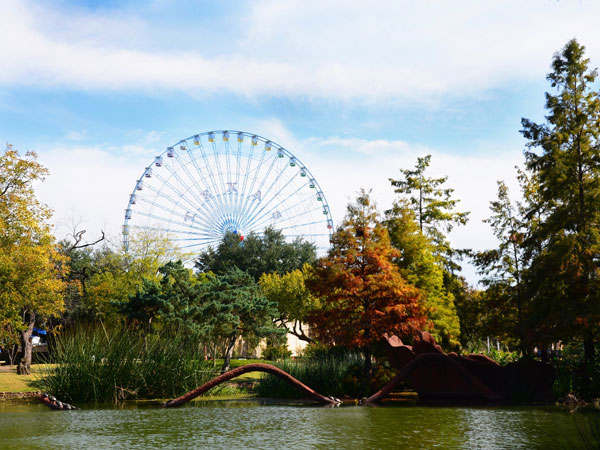 The natural setting of the lagoon is a refuge from the buildings and landscaped sections of the park. The iconic Texas Star Ferris Wheel, the largest in North America, can be seen from almost anywhere in the park. Photo courtesy of the Dallas Park and Recreation Department.