In an area well known for being devastated by the exodus of manufacturing, the Flint Farmers' Market is a historical and cultural gem of the Flint, Michigan, community. The market is a unique place where members of the Flint community can come to shop for local, fresh and seasonal produce; meet friends; and be surrounded by the vibrancy of their community, the vendors and visitors in the market. 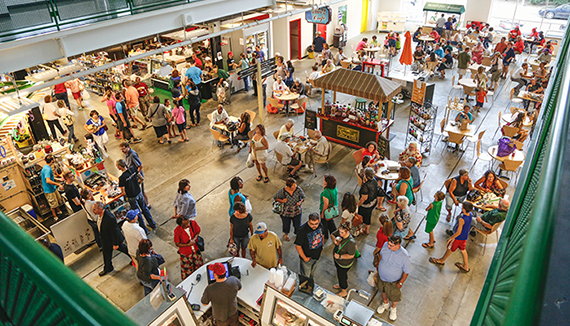 The newly renovated market has a large open-air space for vendors and merchants to sell their wares and for shoppers to sit, mingle, run errands, and meet friends and neighbors. Photo Flint Farmers' Market.

From 1920 to 1940, the original Flint Market was operated in downtown Flint at the corner of Harrison and Union. Congestion created by the market became a nuisance to merchants so it was moved out of downtown to sit on the banks of the Flint River. For many years, the market flourished, but by the 1980s the quality of the market saw a decline in tandem with the automotive industry and the City of Flint in general. In the late 1990s, the market had become the home of a predominantly flea market-type business.

Beginning in the early 2000s, the revitalization of downtown Flint became the project of the nonprofit organization, the Uptown Reinvestment Corporation (URC). Over the course of 10 years, the URC worked to repair the reputation of the market. The success of the market is in part due to the confidence that was rebuilt in the community. This outpouring of confidence and support was the missing piece that helped to make the Flint Market an integral aspect of downtown Flint's revitalization and a centerpiece of the Flint community.

After 70 years, the Flint Farmers' Market relocated to the former Flint Journal printing facility, returning to its birthplace in the heart of downtown. This new building offered the revitalized market a new beginning in a space that is more than double the footprint of the old market. The 50 vendors inside the building sell a variety of products. From fruits and vegetables, to meat and poultry, to breads and baked goods, and cheeses, the market has the capacity to service a customer's grocery store needs (as well as an indulgence or two.) From May through October, the outdoor pavilion provides space for 25 produce and flower vendors, and on Saturdays art and craft vendors also inhabit the space.

The Flint Farmers' Market has also provided many people in Genesee County unprecedented access to fresh and locally grown foods. Twenty-five businesses at the market accept the SNAP (Supplemental Nutrition Assistance Program) Bridge Card, and the Double Up Food Bucks program allows patrons to double the value of their purchases (up to $20 per market visit).

The Flint Farmers' Market represents the importance of planning in community building. This landmark market has had a home in Flint for many years, and provides local businesses, farmers, and vendors the space to share their products and their work with their neighbors, friends, and visitors. 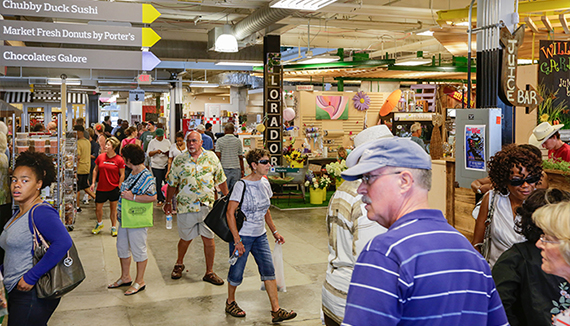 Combine healthy food choices, adaptive reuse, and a strong local community presence, and what do you get? An incredible public arena that is helping to revitalize downtown called Flint Farmers' Market.

Master Plan for a Sustainable Flint. Describes Flint Farmers' Market as being part of the Flint Health and Wellness District (p. 218) 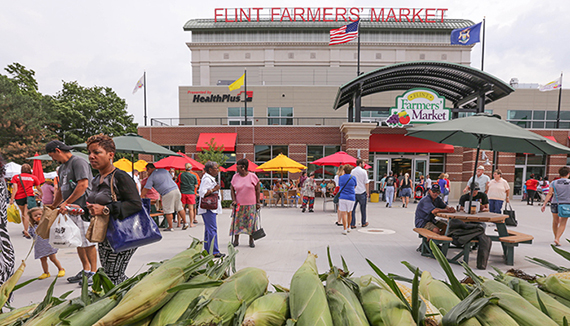 Flint Farmers' Market is helping to bring better food access to many people living in the city. Vendors accept SNAP benefits and other state-run food matching programs, and all of the food is locally sourced from Michigan growers.