Like the cities they traverse, streets change. In the mid-19th century, Washington Street was a new residential district and a center of culture and commerce for Boston's South End. Today, the city's oldest thoroughfare has emerged from decades of decline with a renewed vibrancy.

As one of the American Planning Association's 2008 Great Streets in America, this 1.4 mile segment of Washington Street — from Interstate 90 to Melnea Cass Boulevard — exemplifies planning's ability to create accessible, affordable, and sustainable places that both preserve the past and embrace the future. 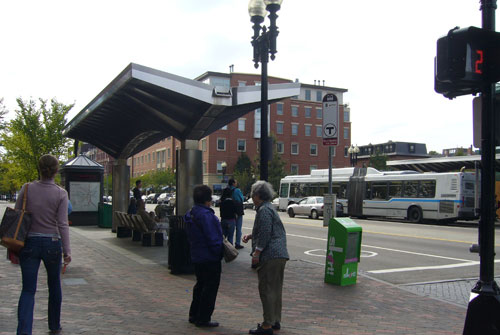 As a main road, Washington Street has had its share of streetcar and later bus routes. Photo courtesy Boston Redevelopment Authority.

Theater goers flocked to Washington Street 125 years ago. The Windsor and Columbia theaters hosted vaudeville, musical, and comedy performances.  Restaurants catering to ticket holders dotted Washington Street. Surrounding the street were stately row houses — most built in the mid-1800s — and Victorian parks. The emerging neighborhood conformed to the 1801 plan developed by Charles Bulfinch, a Federal-era architect who proposed filling the tidal marshes to create a new community.

As immigrant families found their way to the South End, Washington Street's theaters were converted to movie houses.  The area's amazing ethnic and racial diversity — the South End was home to Jews, Syrians, Greeks, Italians, Portuguese, Chinese, West Indians, and African Americans — led to the establishment of Boston's first settlement house on Washington Street in 1891.

When an elevated rail line was erected over Washington Street in 1907, the noise and shadows drove out families and rooming houses began to replace apartments. Suburbanization also took its toll. From 1950 to 1970, the South End lost two-thirds of its population. Entire blocks were vacant and prostitution and drugs were commonplace.

Despite removal of the elevated rail tracks in 1989, differences among residents stymied reinvestment. The groundwork for a comprehensive approach to participatory planning was laid out by Mayor Thomas M. Menino, who in 1995 appointed a 40-member Washington Street Task Force directed by the city's planning and economic development agency, the Boston Redevelopment Authority. At the time, discussions were under way among six neighborhood associations along Washington Street on how to integrate the street into the social and commercial fabric of its bordering communities.

Washington Gateway was formed by several members of the task force as an outgrowth of the planning process. Later that year, Washington Gateway was selected by the city to be part of an expanding Main Streets Program in Boston. Washington Gateway's vision from the beginning was: "Washington Street will be a safe, inviting, tree-lined boulevard that draws people to its parks, shops, cafes and quality services. Known for its efficient transportation, vibrant architecture, abundance of artists, and its cultural, age, and economic diversity, it will be a shopping destination for the unusual and ordinary, and a desirable place to live, work, shop, and visit." 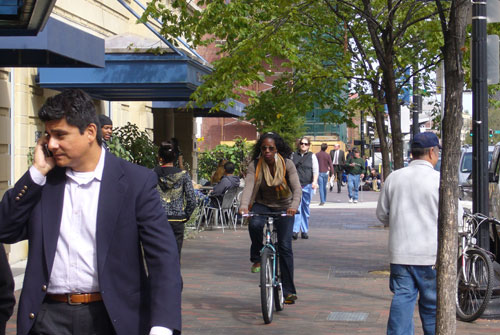 Washington Street is in the midst of an astonishing small-business and real-estate revival that is bringing new life and vitality to this historic part of the city. Photo courtesy Boston Redevelopment Authority.

The community coalesced, supporting new zoning and design guidelines. High-density zoning was adopted to allow for scale and for mixed-use development while respecting the commercial boulevard's historic spine. Today the street is replete with mixed uses, just as it was in the mid-19th century, and the majority of the neighborhood no longer shutters after business hours.

The street's physical transformation began in 2002 when the state's transit authority and highway department spent $54 million on landscaping, the strategic installation of 18-foot brick sidewalks, granite curbing and crosswalks, lighting, and sheltered canopies that serve as stops for the new Silver Line Bus Rapid Transit.

To prevent the displacement often associated with gentrification, the city focused on housing opportunities for a range of family household incomes. Nearly 60 percent of the 1,750 new and renovated housing units are affordable, with an emphasis on owner-occupied housing.

By 2007, $600 million in targeted investment had transformed the street. Sixty-three new shops have opened, making the corridor a destination for local services, home furnishings, art, and dining. Today, historic Federal-era and Victorian structures, many listed and designated on the National Register of Historic Places in 1973 and 1983, are intermixed with contemporary loft developments.

"It's wonderful to see Washington Street receive the praise that it so deserves," said John F. Palmieri, director of the Boston Redevelopment Authority. "Our planning staff at the BRA worked long and hard with the community to breathe new life into this great street. It is because of this unique partnership that Washington Street has become one of the city's grandest boulevards; a great place that has something for everyone." 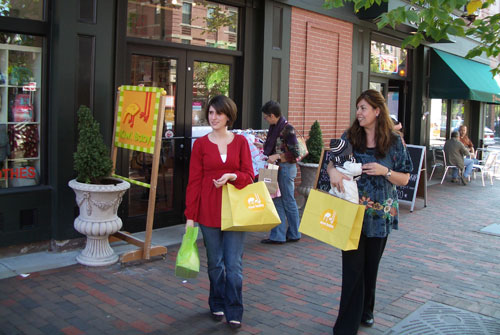 The city's oldest thoroughfare has emerged from decades of decline with a renewed vibrancy. Photo courtesy Boston Redevelopment Authority.