Few places in the U.S. have used the present to recreate the past as authentically and successfully as Williamsburg has done along Duke of Gloucester Street. The street is once again the 99-foot-wide "great street" of Virginia's 18th century capital. Aside from more trees and less mud, the resemblance is remarkable. Buildings have been restored to their 18th century appearance and homes, stores, and other public buildings have been reconstructed at their original locations. The street is closed to motor vehicle traffic along its mile length. 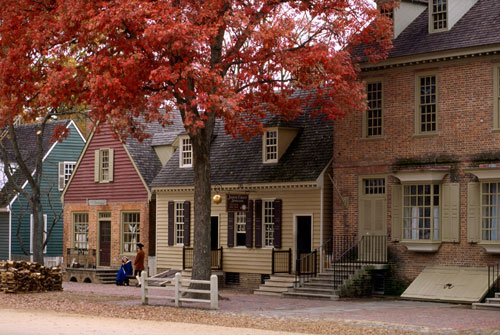 The only evidence of modern life is at the western end, near the College of William and Mary's historic campus, where 41 shops and restaurants are clustered at Merchants Square, a colonial revival historic district dating from the 1920s and 1930s.

To residents, history buffs, and tourists, Duke of Gloucester is a living, outdoor museum. It is a street where you can witness the reenactment of colonial-style, 18th century life. 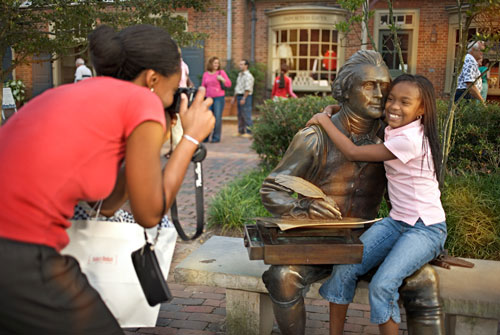 Photo opportunities along the street abound. This Thomas Jefferson statue is in Merchants Square, a modern-day marketplace at the west end of Duke of Gloucester. Photo courtesy of The Colonial Williamsburg Foundation. 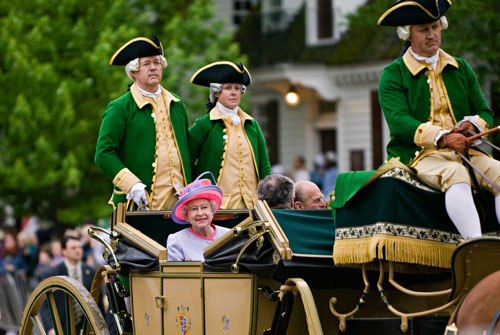 Onlookers watch as Queen Elizabeth's procession of carriages makes its way down Duke of Gloucester Street during her visit to Williamsburg in 2007. Photo courtesy of The Colonial Williamsburg Foundation.