PAS published its first Information Report in 1949. To celebrate this history, each month we're presenting a new report from the archives.

We hope you enjoy this fascinating snapshot of a planning issue of yesteryear.

Moving on to internal relations — the relation of parts to the whole and to each other — the first value of a chart is that it clarifies. Clarification results (or should result) from any process of classification. But the uniqueness of the classification that constitutes an organization chart is due to the facts that (1) it is two-dimensional, and relative position as well as departmental breakdown is revealed, and (2) symbols are used instead of words so that the picture of organization is visual rather than verbal.

When organizational structure is thus classified and described, what then are some of the practical uses of the organization chart? For one thing, it can be used to discover organizational weakness and inefficiencies, such as duplication of functions, confused channels of authority and responsibility, and inappropriate distribution of personnel. Sometimes the very act of making a chart will reveal confusion about lines of authority and job duties. Organization charting, therefore, goes hand in hand with job description and job classification.

The need for organization charting in a large organization is more immediately apparent than in a small one. Without an organization chart (which, incidentally, need not necessarily be published) it is almost impossible to control personnel costs and recruitment. For the same reason, however, the unique analysis of structure made possible by the organization chart is valuable in smaller staffs as well, particularly those that are expanding in work load and personnel.

Small staffs usually function informally, and formal structural analysis is not necessary because both functions and relationships are understood by everyone concerned. Furthermore, jobs in small staffs are not rigidly defined; and new duties that come into existence are allocated partially on the basis of individual capabilities. However, with all expanding staffs there comes a time for soul-searching, a time for appraisal of the job primarily on its own merits rather than primarily on the merits of the particular person performing it.

Finally, the organization chart is almost indispensable to reorganization. When used for this purpose, it is the beginning of organization planning rather than the end product. In this respect it is analogous to the survey of existing land uses that normally precedes the land-use plan.

One warning should be voiced here. An organization chart is a picture of something that exists. To make a chart before personnel are hired is to make an abstraction of an imaginary institution. While it may be thought desirable on occasion to chart prior to fact, such a picture should be drawn tentatively and only after duties and responsibilities of organizational subdivisions and individual positions are pretty well thought out.

It is generally agreed that organization charts can be classified into four basic types, the first three of which describe organizational setup, the fourth showing sequence in time or process.

1. Structural Chart. Sometimes called a departmental chart, this chart shows the anatomy of the organization. It reveals the basic relationships between the various parts of the organization. Strictly speaking, the structural chart contains no information that would distract from communication of its main purpose — that of displaying structure.

2. Functional Chart. The configuration of the functional chart is identical with that of the structural chart, but it also contains descriptions of the specialized work done by segments of the organization. A statement of duties or functions is placed within each appropriate box.

Functional statements should be clearly stated, as all-inclusive as possible, and should be placed in the present tense to eliminate unnecessary words. Functions common to all divisions shown on the chart should be omitted.

3. Position or Personnel Chart. Here "position" is used as a dignified version of "job." Again, the specific information needed is superimposed on a structural chart. Positions are indicated by job title, and their placement within boxes shows how they fit into the plan of organization.

4. Flow or Process Chart. Strictly speaking, the flow chart is not an organizational chart, but is a detailed record of the successive steps taken by organizational subdivisions in processing their work. It shows the course or channel through which work flows, and may be used to analyze the flow of work and to subsequently rearrange it or to eliminate needless effort. The flow chart is uncommon in planning agencies, and unless work is characterized by a great number of routine operations, this type of chart does not serve a useful purpose.

In practice, planning agencies often find combination charts to be more useful for their purposes than a separate analysis for structure, function, and position. The combining of chart types is more apt to occur where the organization is simple or the staff is small. Sometimes a structural chart is accompanied by a statement of functions. This statement may be detailed and rather lengthy, constituting a compilation of job descriptions, or it may be brief enough to be placed on one page with the chart.

Figure 1 is a simplified composite of the three different kinds of organizational charts. The top three levels are structural; the third level contains a structural box, a functional box, and a position box, all representing the same departmental subsection so that comparisons can be made between the kinds of information shown on the three different charts. 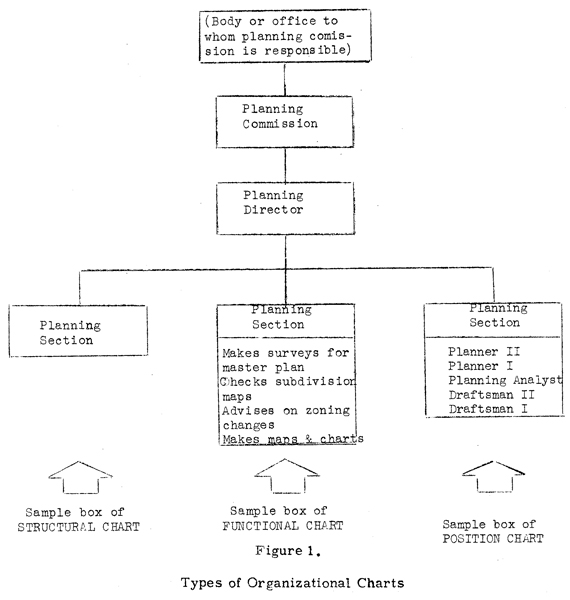 Authorities agree that organization charts should have the appearance of symmetry, simplicity, and unity. Symmetry is one of the ways of showing the logic of the organizational structure. Sometimes chart makers are tempted to route connecting lines along an indirect instead of direct path in order to get the entire chart on a sheet of a specified size. This results in a confused picture of the organizational structure and in part nullifies the purpose of the chart. Equally misleading, however, is an artificial forcing of symmetry. Most organizations inherently possess symmetry — and this should be reflected in the chart.

Unity applies chiefly to the arrangement of chart components on the paper. Compactness, coherence, emphasis of major lines of authority and responsibility, use of consistent boxes (rectangles and squares instead of combining rectangles with circles, triangles and ovals) all contribute to an effect of unity.

The two essential parts of a chart are the boxes and the lines connecting them. Different kinds of relationships are shown by box positions, kinds of lines, and the use of special designating symbols. The possibilities of variation are almost endless.* However, solid connecting lines and solid-line boxes are adequate for most purposes.

In an article on organization charts in a British governmental bulletin it is observed that "the lines joining the various officers have a meaning which involves some degree of action; in some respects they correspond to verbs where words are concerned." In several of the organization charts shown at the end of this Information Report the verbs which the lines represent are themselves placed on the chart.

Certain charting practices are so widely followed as to have become nearly standardized. These practices are illustrated in Figure 2.

Other matters of information that should appear on the face of the chart are:

1. Title: city or county, planning agency, and kind of chart

Where organization charts are contained in annual reports of city or county agencies, titles are often abbreviated and the date is not always indicated. 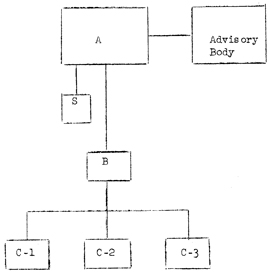 2. S is a staff position, possessing no authority.

3. Advisory bodies are indicated by the use of the separate "side arm," a horizontal line proceeding from the side of the box.

Some of the pitfalls of organization charting have been mentioned in different parts of this report, but one danger needs especially to be emphasized. This is the danger of the misuse of solid, vertical lines. It should be kept in mind that solid, vertical lines stand for authority and responsibility; they never merely connect positions in a hierarchy unless that connection bears authority. Misuse of the solid, vertical line is most likely to occur in a position chart or in a combined structural-position chart. Figure 3 illustrates (A) the right and (B) the wrong way of indicating that the entire planning section is responsible to the planning director. (B) would not be incorrect if authority actually flowed from one position (or level) to the other. 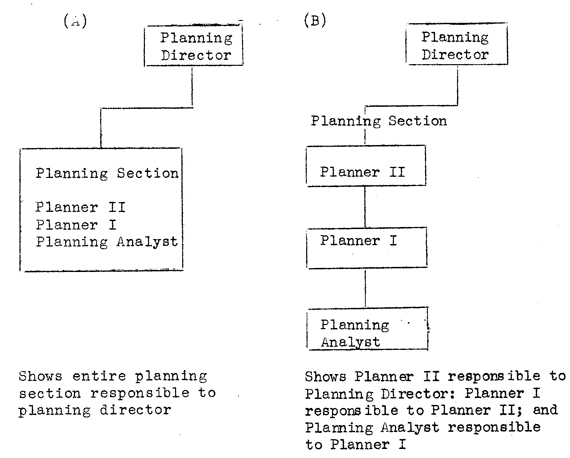 The balance of this report consists of a group of organization charts taken for the most part from annual reports of various city and county planning agencies. There is some spread in population size, but most cities and counties represented are over 100,000.

All three types of charts — structural, functional, and position — are to be found in this group, either singly or in combination. Strictly speaking, there are no flow charts. Although some examples do designate the nature of the relationship between organizational subdivisions by using such words as "assist," "coordinate," "elect," and "appoint," this is something different from the detailed analysis of routine operations that the typical flow chart describes. The use of arrows and other devices employed in these examples to carry the eye along from one point to another should not be confused with the arrows often used in a flow chart.

The intended distribution of the report in which the organization chart appears will probably affect its form to some extent. If distribution is to be widespread, and among the recipients is a number of persons not familiar with planning organization and function, then the use of graphic elements may well add to the comprehensibility of the chart and an understanding of the position of planning in local government.

Several conventional organization charts are among this group. Although among them are examples embodying the principles of charting (symmetry, simplicity, and unity) and others showing proper arrangement of chart components, no one can be singled out as a model.

Several generalizations can be drawn from this group of charts. The first — a rather obvious one — is that the larger the staff, the more complex the structure and the more specialized the individual functions. Notice, however, that it is not always possible to be sure that valid inferences regarding complexity and specialization are being drawn from a comparison of two or more charts. A case at point is The Regional Planning Commission of Los Angeles County and the City Planning Commission of Los Angeles. According to the 1954 Municipal Yearbook, Los Angeles County Regional Planning Commission employs 90 full-time persons and the Los Angeles City Planning Commission employs 70 full-time persons. They are comparable in staff size. Judging from the organization charts alone, the city commission appears to be vastly simpler than the county commission. But this is not necessarily the case because (1) the charts are different types, the city chart being structural (with functional explanations in accompanying text), and the county chart being position; (2) the city chart represents a higher level of abstraction than the county chart.

A second generalization that can be drawn from this group of charts is that there appears to be a fairly consistent dichotomy between planning and administration.

Sometimes the zoning functions appear entirely in an administrative category, sometimes they constitute an individual section, and sometimes zoning activities are split between planning and administration. A third generalization, then, is the tendency to separate the planning and zoning functions, either within a major organizational subdivision, or into entirely different categories. 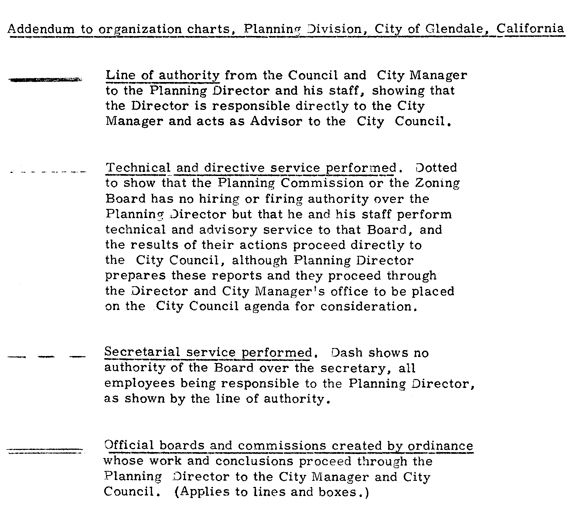 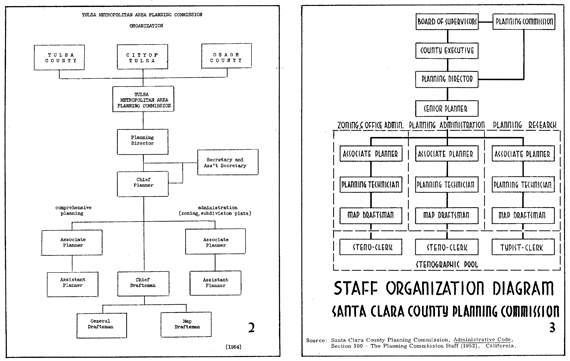 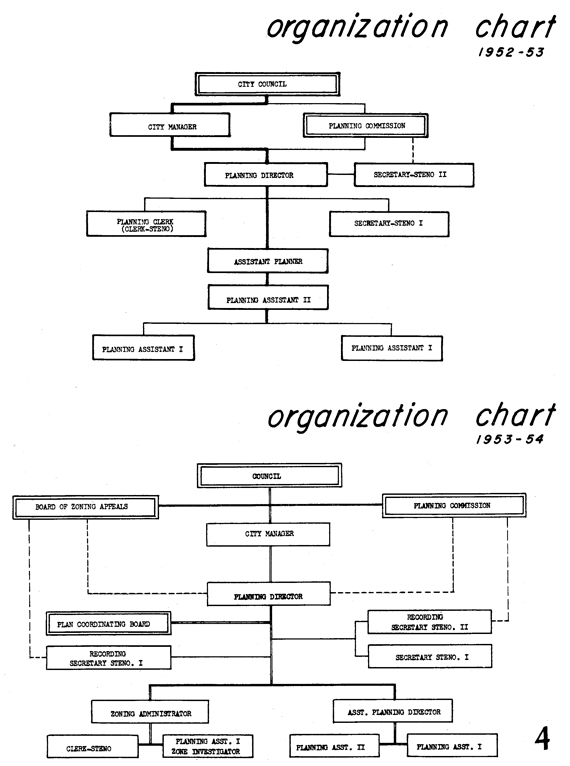 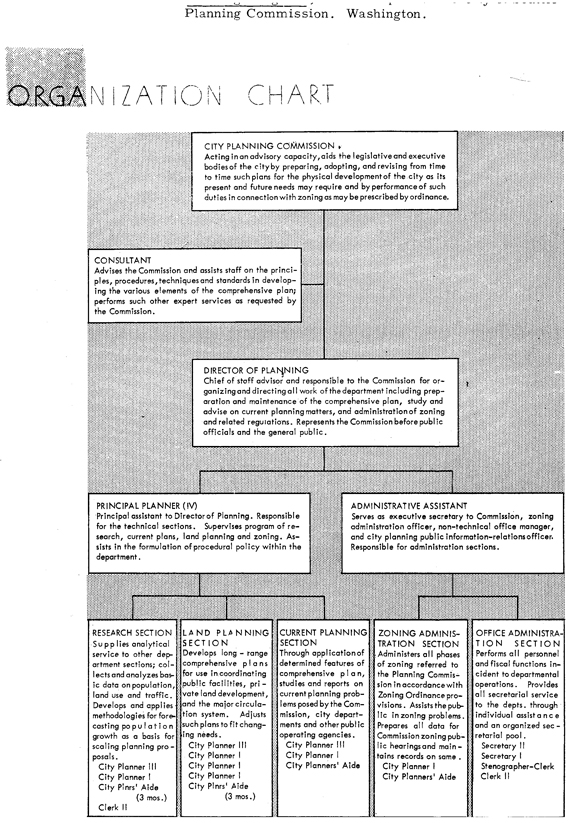 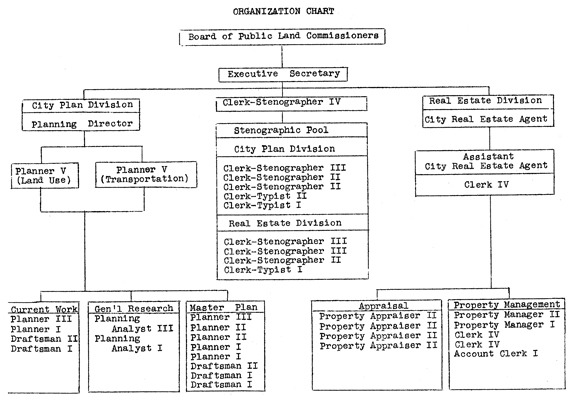 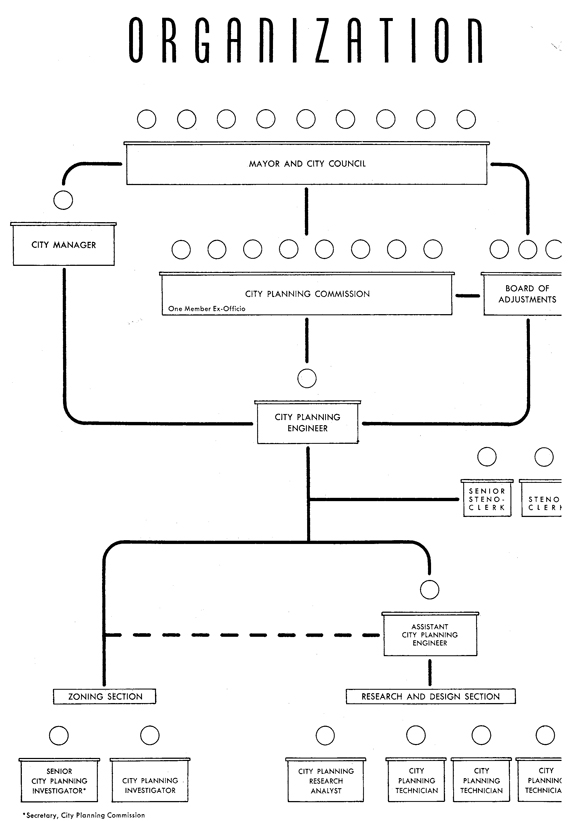 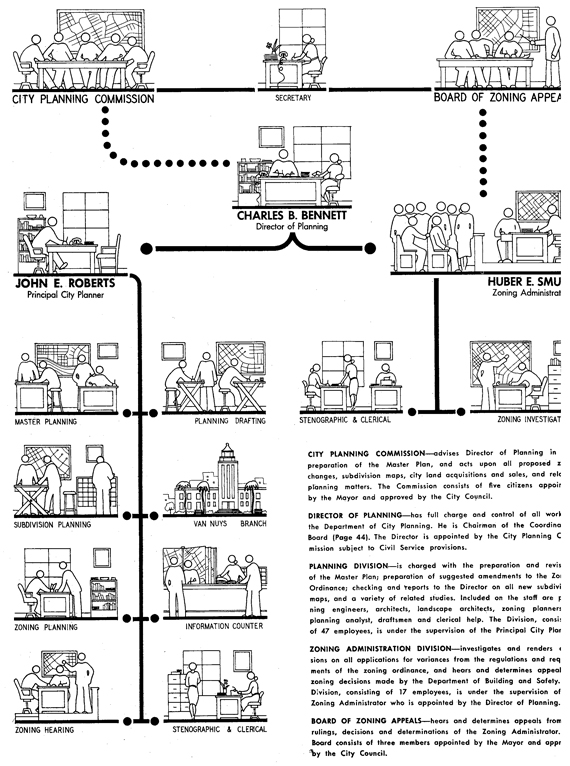 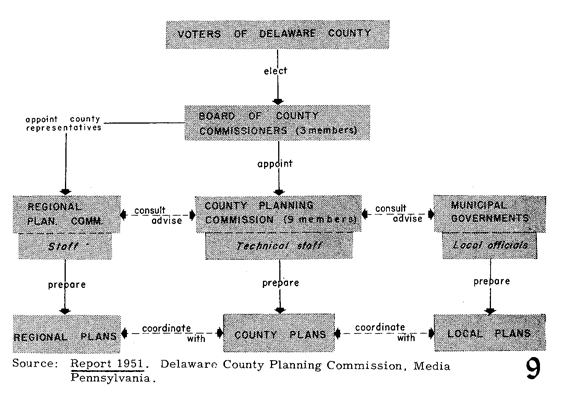 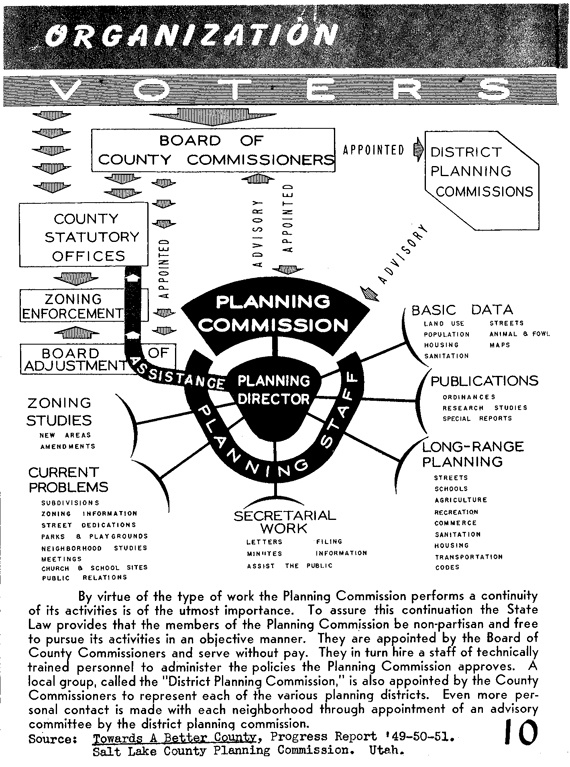