Attention: The Age of Automation Is Right Ahead

What self-driving cars will mean to drivers and the rest of us.

Imagine arriving at work on a rainy Monday morning. You step out of your automated car at the entrance to your office. Freed from driving, you spent the ride reading the news, sending emails, and drinking coffee. After you disembark, the car makes its way to a local parking lot, a distant maintenance facility for service, or back home to your driveway until it is summoned at the end of the day or used by family or friends. Because the car is electrically powered, you've spent only pennies per mile.

While this may seem like a scene in a sci-fi movie, the reality of the automated car is a lot closer than many think. The technology and economics behind self-driving cars are interesting and noteworthy, but there are important implications about how automated travel will impact the existing infrastructure and its future development. 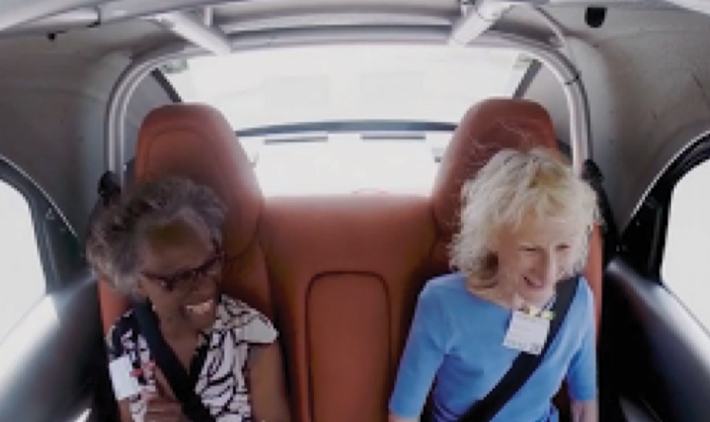 The rise of the automobile in the early 20th century had, arguably, the greatest impact on urban planning and development in modern history. Before the early and mid-1900s, private transportation was unavailable to middle and lower income groups. Having no precedent, the impact of private cars on land development and public infrastructure was extreme and untethered.

With the implementation of the Federal Aid Highway Act of 1956, also known as the National Interstate and Defense Highways Act, it became clear that professional planners were needed to work with civil engineers and landscape architects to shape zoning, public policy, and large-scale development. Many of the planning and development issues that persist today are the direct result of the rise in the ownership and use of private cars, including the fall of most public and private rail systems across the U.S, the negative impact of interstate highways on small towns, and the oppressive car-centric layout of urban and suburban areas.

Foresight and proper planning might have prevented or at least mitigated some of those issues. With the rise of electric power, automation, and robotics, transportation has a future full of possibilities. The bright side is that we can now learn from our past planning mistakes and attempt to anticipate changes in transportation, development, and cultural needs.

The development of the automated car — and automation in all forms of transportation — will certainly have tremendous impacts on where people live, how our cities and towns are reshaped, and how we rebuild our infrastructure. In 2014 in Singapore, a city notoriously congested with traffic, the Massachusetts Institute of Technology tested an automated taxi service with enough promise to warrant officials to sign on for a large open test. In 2015, driverless cars for public use are being introduced in the U.S. in controlled programs. Google is undertaking production of an automated car, and California has approved testing on public roads by Google and six other companies.

It is important to understand how an automated car functions. Collecting data in a number of different ways, the on-board computer has diverse sources of information, making it more reliable. Through GPS and satellite connections, it determines its location in the broader context, plans its route, and updates its software. In its immediate context, a camera (often roof-mounted) gathers information in 360 degrees; it reads traffic signs and signals and detects road lines to stay in its lane, as well as the location, speed, and trajectory of the surrounding cars, pedestrians, animals, and various objects. In that context, accelerometers provide some of the best information by detecting vibrations from rumble strips at the edges of the road if the car strays from its lane.

Using all these sources, a self-driving car develops a database of the environment — and obstacles — of private and public roads, totaling hundreds of thousands of miles over several years. The information from each vehicle is then combined and shared with every other self-driving car, creating a super clearinghouse of data and collective learning available to all cars. With this information, brand new cars can potentially have millions of miles of driving experience preloaded. Given the growing number of researchers and how quickly the concepts and technology have spread, the database of driving experience is growing exponentially.

Not long ago, the idea of an automated car for private use seemed far-fetched. But in October 2014, Tesla Motors announced that all new Tesla Model S cars produced after September 2014 would be fitted with "autonomously capable" programming. While not fully driverless, the car's cruise control can be set so that the car would change lanes, adjust speeds by reading road signs, and remain at safe distances from surrounding cars and objects. In addition, the driver could still have full control if desired. This could be the first step toward complete automation in a commercially available vehicle.

Research groups at Google, the University of Michigan, and Carnegie Mellon University, working alongside such manufacturers as Tesla, Mobileye, and Nissan, have been making great strides in developing the necessary technology. Carlos Ghosn, CEO of Nissan and Renault, was recently quoted as saying that his company is working on a self-driving car and that autonomous vehicles will be available to the public by 2020.

Even the more conservative technologists believe that the majority of car owners will shift to self-driving cars by 2030. The attitude from the automobile market is clear: Company owners across the board predict success and have made tremendous investments.

It is also clear that it will take more than just researchers and investors to make this a reality. There must be public demand as well as private and government support.

Over the last decade, car accidents have resulted in 30,000 to 35,000 deaths annually in the U.S. Although those figures are trending downward, many supporters say that automated cars could reduce that number further as well as relieve countless hours spent in traffic. It could eliminate drunk, distracted, or reckless driving, all of which are leading causes of accidents. It offers transportation options for the elderly and for people who are physically or mentally challenged, something unavailable outside of private or public programs that are expensive to maintain. Moreover, automation would reduce the amount of energy required by today's technology, thereby lowering operating and maintenance costs.

Although automation has a promising future and extremely strong support, there are a number of metaphorical speedbumps that must be overcome before it becomes available to the public at large. Sun glare and heavy rain or snow can interfere with programming and camera technology. Transitioning from driver-controlled cars to driverless vehicles will create challenges in traffic control and compliance with speed limits. And while accident rates could ultimately be lowered and traffic congestion reduced, during the years-long transition, there may be no appreciable difference in either of these. In fact, the disparities between cars with and without drivers might create other issues for law enforcement officials.

Other problems, like driving through construction areas, detours, and lack of clear signage, can be addressed by planning, design, and transportation engineering groups. New construction details — such as rumble strips on the edges of roads and between lanes — may be adopted as standard practice, along with nationally uniform signage, and road lines (including turn arrows and crosswalks).

What does this new technology mean for the planning profession? So much of our built environment already favors the automobile. As electric and automated cars come to market, what will happen to public transportation, our road systems, our service businesses? How will our communities change? When cars can park themselves, commodious drop-off areas will become more important. Large parking lots can be located away from dense areas. Parking requirements will be reduced. It is possible that, with the success of increased automation, urban areas might become more walkable.

Longer range predictions for future changes include collective service facilities that cars can drive to themselves. In a more radical prediction, car ownership becomes collective, and travel is membership based, similar to the Zipcar model. Given that 90 to 95 percent of a car's life is spent parked, this concept is not as wild as it may sound.

Uber, the smartphone app-based car service, announced in February 2015 that it will invest up to $4.9 billion and team up with Carnegie Mellon to explore and develop its own self-driving vehicles. This effort means building a laboratory in Pittsburgh and hiring 50 senior scientists. The goal, Uber announced, is to explore "long term technologies [that bring] safe, reliable transportation to everyone."

When door-to-door service uses private autonomous cars, without transfers or exposure to inclement weather, what will happen to public transit? There are automated commuter and light-rail systems such as the AirTrain service to JFK Airport in New York and the larger subway system in Tokyo that are fixed in their paths. But will automated public systems be able to compete against individual cars that drive and park themselves? In New York City, subway commuters are plagued by delays, unruly or unhealthy passengers, and the transfers needed to get to one's destination. With new automation looming, can planners find ways to improve and promote public transit, and encourage its use?

This emerging technology holds much promise for the 21st century, but the infrastructure that will accommodate it is rooted in the 20th century. Being aware of the predictions and the trends, we need to start looking now at ways to accommodate the changes that are certain to come.

The U.S. will be one of the first countries to meet this challenge on a large scale; we will be setting a precedent. It is important that the decision makers — the planners, the private developers, and the public agencies — address these changes together and lay out clear plans for the future of transportation, whatever that may be.

Christopher Tramutola is a licensed landscape architect specializing in academic and active recreational landscapes. His work in ecological and urban modeling as a design tool has led to research and experimentation in connection with the future of analysis and design. Contact him at ctramutola@petergisolfiassociates.com.

Image: How do they do it? Watch self-driving cars and their passengers hit the road. youtube.com/watch?v=bDOnn0-4Nq8