How to Boost Economic Equity by Supporting the Informal Economy

Fines, fees, and strict regulations burden street vendors and other small-scale entrepreneurs. Here's what planners and policymakers can do to change that.

Food vendors are some of the most common informal workers in urban areas. Here, a woman sells street-side tacos. Photo by Luciano Leon/Stockimo/Alamy.

There's something special about waiting in line at a popular taco street vendor stand. Like being at Disneyland, it's a shared social experience with other eager customers. We sometimes get giddy when it's our turn to order: listening to the majestic sounds of carnitas being chopped, making special culinary requests. In a time in America where many residents are experiencing the economic pain of COVID-19, where else can we get delicious food at an affordable price?

But for street vendors, many of them immigrants, more work is involved than simply preparing and selling food. As petty entrepreneurs, they order supplies for the day, get up early, prep the food, drive to their designated location — and, in some places, avoid the police.

These hardworking petty (or small-scale) entrepreneurs are an integral part of the informal economy, engaging in a wide range of unregulated activities that contribute to the vitality and social fabric of our neighborhoods, despite an often-fraught relationship with policies. High permitting costs, bureaucratic regulations, and hefty citation fees were a burden for street vendors long before the pandemic; now, the significant health and economic impacts have hit informal workers and petty entrepreneurs hard.

As communities work to prioritize economic equity and justice, how can planners and policymakers reassess punitive approaches and look for ways to better support those who depend on the informal economy to survive?

A vendor sets up shop at a curb in Los Angeles, which hosts a vibrant informal economy largely driven by Latina/o and immigrant small-scale entrepreneurs. Photo by Rudy Espinoza.

While the term "informal economy" appears to be nebulous or fuzzy, it's generally defined by a few key elements: how income is incurred, taxes, and regulations — or the lack thereof.

In The Informal Economy: Studies in Advanced and Less Developed Countries, Manuel Castells, PhD, and Alejandro Portes, PhD, write, "The informal economy [is] a process of income-generation characterized by one central feature: it is unregulated by the institutions of society, in a legal and social environment in which similar activities are regulated." (Emphasis by the original authors.) Meanwhile, the Federal Reserve Bank of Boston defines informal work as "temporary or occasional side jobs from which earnings are presumably not reported in full to the Internal Revenue Service."

That can include small companies, workers, and petty entrepreneurs like street vendors, gardeners, day laborers, and domestic workers (or domésticas) — including my late mother, Carmen Mejía Huerta. Typically, we're talking about individuals who get paid in cash or personal checks and lack access to work benefits many Americans take for granted, like unemployment benefits, workers compensation, social security, safety regulations, and much more.

While we have ample demographic, housing, and employment data for the formal economy, that is not the case for the informal economy. What we do know, however, suggests that it encompasses a majority of jobs across the globe: more than 60 percent, according to KCET, an LA-based Public Service Broadcasting station. Its 2019 reporting cites credible sources like the International Labour Organization.

In the U.S., the portion of the workforce engaged in the informal economy remains sizeable. A 2014 survey from the Federal Reserve Bank of Boston found that around 43 percent of full-time workers and 59 percent of part-time workers earn a wage in the unregulated sphere, amounting to millions of people across the country.

Nearly 60 percent of America's part-time workers earn a wage in the informal economy. That amounts to millions of people across the country, according to a Federal Reserve Bank study. Photos by Rudy Espinoza.

We can't examine the informal and formal economies as silos; they are interrelated and interconnected. Street vendors, for example, must buy their products from the formal economy, where earnings then return via rent, groceries, and other spending.

And we're not talking about a few cents and dollars here. The LA-based Economic Roundtable estimates that the annual average wage for an informal job is around $12,000. In 2004, around 679,000 people were operating in the informal economy in LA County, resulting in around $8.1 billion earned in one year alone.

The goods and services provided by the informal economy, like food service, labor, and domestic work, are also vital to the persistence and identities of our communities. Yet despite this crucial, symbiotic relationship, informal workers and petty entrepreneurs have seen little financial assistance during the pandemic, further exposing and exasperating existing racial and class inequities in America.

In the state of California, Latinas/os comprised about 40 percent of the population in 2019 and a significant portion of its low-wage and service workforce, including those operating in the informal economy. According to the state's official COVID-19 website, "COVID-19 disproportionately affects California's low income, Latino, Black, and Pacific Islander communities, as well as essential workers such as those in health care, grocery, and cleaning services."

And while it's true that the pandemic has impacted everyone, Latinas/os and Black and Indigenous people continue to contract and die from COVID-19 at higher rates than white Americans, according to the Centers for Disease Control and Prevention.

Still, many municipal policies across the country treat them as equally punishable by law. Even in major cities like LA and New York City, where street vending is legal (as of 2019 in LA), vendors who operate in restricted areas or don't secure permits tend to be treated like criminals. A Latina street vendor named Elsa, for example, made headlines in 2019 after she was handcuffed and arrested for selling churros at a New York City subway stop without a license. Her experience is not uncommon.

Attempts to formalize the informal economy often create significant financial and legal barriers for operators. Santa Monica's Ordinance Number 2607, which was passed in April 2019, regulates street vending and establishes considerable penalties: fines of up to $500, misdemeanor charges, and jail time of up to 6 months for violations. For many, the fine alone is insurmountable. Using The Economic Roundtable's estimate that a street vendor earns $12,000 per year, or $230 per week, it could take more than two weeks of earnings for a Santa Monica vendor to pay the maximum fine.

Permits, meanwhile, are difficult to obtain and come at their own high cost: $541 annually in LA, for example. Difficult-to-secure health, tax, and business permits are also required, and some cities, like San Fernando, California, also mandate criminal background checks and liability insurance.

"In order to sell food, a sidewalk vendor must obtain a health permit from the County Department of Public Health," which is outside the city's jurisdiction, says Doug Smith, a senior staff attorney of LA's public counsel. "Due to extremely high costs as well as complicated and ill-fitting permit requirements, most food vendors are still unable to obtain this county health permit, and thus unable to fully enter the formal economy."

To create more just cities, planners and policymakers can look to reverse or abandon enforcement-only measures that punish petty entrepreneurs. This includes taking into consideration that the informal economy is interrelated and interconnected to the formal economy.

While not comprehensive, the following recommendations are a good place to start changing our approach:

1. Give direct aid to workers and petty entrepreneurs.

While there have been a few rounds of stimulus checks at the federal level sent to individuals impacted by COVID-19, these desperately needed checks, along with business loans (like the Paycheck Protection Program), only go to those in the formal economy — those who filed taxes in previous years and own established businesses. By assigning individuals without legal status with an Employer Identification Number (EIN), the federal government can manage this system without massive fraud for those who depend on the informal economy to survive.

Internationally, many non-governmental organizations and for-profit groups have been successful for years in helping owners of very small businesses in need, particularly in underdeveloped and developing countries. By providing small loans at a zero percent interest rate with manageable regular payments due within a reasonable time period, NGOs, for-profit groups, and even government agencies in the U.S. could make a significant impact.

The Promotora Model (also known as the Promotor Model) consists of a grassroots practice to invest in community leaders and trusted individuals so they are trained to share vital information among community members, like navigating the health care system and promoting good health. In the U.S., Latinas have particularly taken on a leading role in these grassroots efforts. Recently, LA County, under the leadership of Supervisor Hilda L. Solis, expanded the promotora model as a response to the pandemic. Given the lack of trust Latina/o communities tend to have toward government due to neglect, racism, and marginalization, it's imperative that planners and policy makers rely on and cultivate the organic leadership found in these communities to share reliable information and resources.

Álvaro Huerta is an associate professor in Urban and Regional Planning and Ethnic and Women’s Studies at California State Polytechnic University, Pomona.

Expanding Equity and Affordability, One Lot at a Time
Oct. 1, 2020 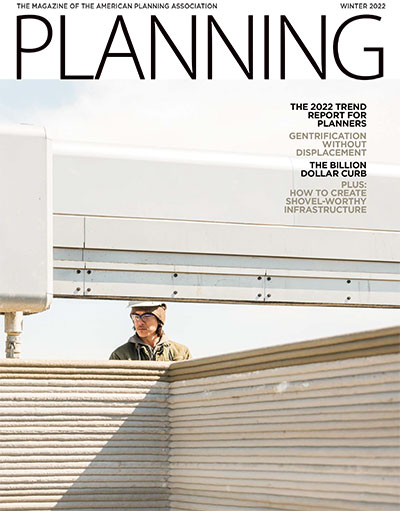